Thyroidectomy is one of the most prevalent performed surgeries worldwide by a variety of trained surgeons in various fields such as general surgery, endocrine surgery, otolaryngology, thoracic surgery, head and neck surgery and oncological surgery (1, 2). The critical location of thyroid gland in the neck area and its important neighboring structures have made thyroidectomy a sensitive procedure which may lead to sever post-surgical complications (3). Curing the disease and keeping the complications to a minimum has remained as a challenge for thyroid surgery(4).

Thyroidectomy had been considered as a surgery with mortality rate of about 50% before admirable effort of “Theodor Kocher” who reduced this rate to less than 4.5% by advocating surgical methodology (5, 6). This remarkable progress made him a Nobel laureate in 1909.

Nowadays mortality and morbidity of thyroidectomy are well-known and rarely occur in practice; nevertheless some of them, like post-operative hemorrhage and airway obstruction, are life-threatening and may be fatal if no prompt action is taken (7, 8). Recurrent laryngeal nerve palsy (RLNP) or hypomobility and hypocalcemia are two major complications of thyroidectomy(9).  Post-operative bleeding, seroma formation, wound infection, hematoma and less commonly Horner syndrome are among other post-surgical complications of thyroidectomy. (1, 6).

In this cross-sectional study we retrospectively reviewed profile of patients who underwent conventional (transcervical) thyroidectomy between March 2017 and March 2018 at Baqiyatallah University hospital, Tehran, Iran.  The study protocol was registered at ethics committee of Baqiyatallah University of Medical Sciences (Tehran, Iran). Patients with incomplete information, any other underlying diseases or concurrent surgery in the same hospitalization were excluded from the study.

Eventually 117 (91 female and 15 male) patients with a mean age of 46±13 years underwent analysis.   Multinodular goiter (MNG) was the most frequent (57%) primary impression of the study individuals followed by thyroid nodule and thyroid lymphoma with 32 (29%) and 11 (10%) patients, respectively. Only one patient had undergone surgery for cosmetic reasons by her own intention.

The mean duration of surgery was 127± 58.05 minutes in study individuals.  About 31% of the patients had a kind of complications after surgery. Nausea was the most frequent complication with 14 (13.1%) patients followed by hypocalcaemia (5.12%) and surgery site bleeding (3.41%) (Figure 1). 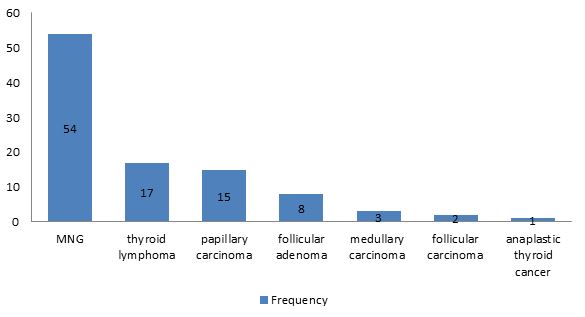 We found that multinodular goiter is the most prevalent final pathology of extracted thyroid specimens in study individuals. Most of the patients underwent total thyroidectomy followed by subtotal thyroidectomy. Of all patients, about one-third showed a type of immediate post-surgical complication among which nausea was the most common one.

Mean rate of temporary and permanent RLNP are 9.8% and 2.3%, respectively due to a systematic review (13). However; no similar complications were seen in our series of patients.

The present study has some limitations. Retrospective study design is one of these limitations which caused loss of data. Also results could have been analyzed for each surgeon separately in case we had a system for recording immediate post-surgical complications.

There are no conflicts of interest in terms of the present manuscript.

The study protocol was registered at ethics committee of Baqiyatallah University of Medical Sciences (Tehran, Iran).